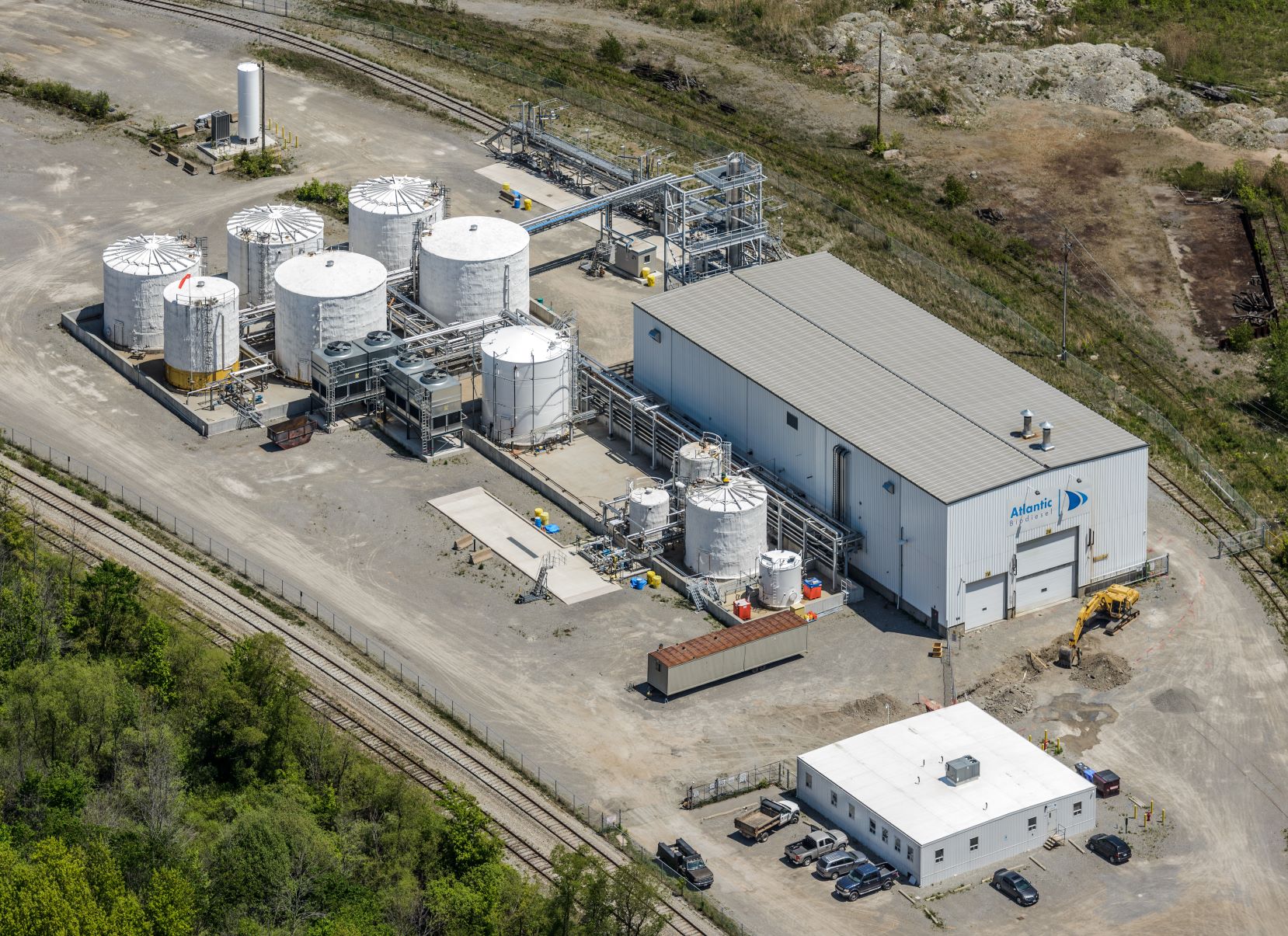 The purchaser is a wholly owned subsidiary of leading German bioenergy producer VERBIO Vereinigte BioEnergie AG (“VERBIO”). VERBIO first announced that it had entered into a purchase agreement with Atlantic Biodiesel in May, and expected the transaction to close by mid-year.

Financial terms of the transaction were not disclosed. The assets include a 45 million gallon per year biodiesel plant, making it the second-largest operating biodiesel plant in Canada. Located near Welland, Ontario, Canada, the plant sits on approximately 16 acres of land, featuring a tank farm for feedstock, chemicals, and finished product storage. The Desmet Ballestra-design plant can also produce 4 MGPY of high-grade glycerin.

“This sale marks the twenty-ninth successful biofuels transaction for Ocean Park, which further solidifies our position as a leading advisor in the renewable fuels and chemicals industries,” said Bruce Comer, an Ocean Park managing director. “We’re proud to apply our expertise toward helping this dynamic industry through challenges and growth.”

About Atlantic Biodiesel Corporation
Atlantic Biodiesel Corporation operates one of the largest biodiesel plants in Canada. The state-of-the-art facility is based on class-leading Desmet Ballestra technology used successfully around the globe in multiple biodiesel plants. The facility can produce 170 million litres (45 million gallons) per year of renewable, clean-burning biodiesel and 15 million litres (4 million gallons) per year of high-grade, kosher-certified glycerin. The facility has extensive rail capacity and is strategically located close to key Canadian and American markets.

About VERBIO Vereinigte BioEnergie AG (VERBIO)
VERBIO is one of the leading independent producers and suppliers of biofuels, and is also the only large-scale producer of biodiesel, bioethanol and biomethane in Europe. The annual production capacity amounts to approximately 470,000 tons of biodiesel, 260,000 tons of bioethanol and 600 gigawatt hours of biomethane. The Company produces its highly efficient fuels using internally developed, energy efficient production processes and innovative technologies. VERBIO’s biofuels achieve CO2 reductions of up to 90 percent compared to petrol or diesel. VERBIO delivers its products directly to European oil companies, oil trading companies, independent filling stations, freight forwarders, municipal utilities and vehicle fleets. In addition VERBIO markets high-quality pharmaceutical glycerin for the consumer goods and cosmetics industry (glycerin is produced as a by-product in the production of biodiesel) as well as animal feed and fertilizer, a by-product of bioethanol and biomethane production. The VERBIO share (ISIN DE000A0JL9W6/WKN A0JL9W) has been listed in the prime standard segment of the Frankfurt Stock Exchange since October 2006.

About Ocean Park
Ocean Park is a leading boutique investment bank focused on the renewable fuels, energy, food and agribusiness sectors. The Ocean Park team has significant operational and transaction experience, including advising on mergers and acquisitions, financings and restructurings. Since its founding in 2004, Ocean Park has successfully completed over 60 transactions and client engagements. Its professionals are based in Los Angeles, Houston, Omaha and New York. For more information, please visit oceanpk.com or call (310) 670-2093.

Debby Hunt is the Office Manager at Ocean Park and has over 17 years of experience as an administrative professional. For the majority of her career, her focus has been in the healthcare industry where she gained a wide range of experience in academic medicine, executive level support and patient care administration.

Prior to joining Ocean Park, Ms. Hunt was the Financial Services Specialist for 3 specialty centers at Cedars Sinai Medical Center and Team Lead where she oversaw 9 administrative assistants. Ms. Hunt received a B.A. in Sociology with a Minor Degree in Education from the University of California, Los Angeles.

Bruce Comer is the founder and a Managing Director of Ocean Park. He has decades of experience advising boards, funds, owners and lenders on capital structures, acquisitions, divestitures, restructurings and operational issues. Prior to founding Ocean Park, he was a Principal at Platinum Equity, where he played a key role in raising the firm’s $700 million fund. He also previously served as the Chairman and CEO of Allegro Biodiesel, a publicly-traded company. He has served as a senior executive at a global telecom company, a Vice President in Merrill Lynch’s telecom investment banking team, and a management consultant in the US and Southeast Asia. Bruce has published articles in industry journals, and appeared at conferences and on CNBC to discuss renewable fuels. Bruce received his Bachelor’s Degree, cum laude, from the Woodrow Wilson School of Public and International Affairs at Princeton University; a Master’s Degree with Distinction in International Relations from Johns Hopkins University; and an MBA in Finance from The Wharton School.

Mark Fisler is a Partner and Managing Director of Ocean Park. During the last several decades, Mark amassed significant senior leadership experience as an investment banker, a corporate financial advisor, a business executive and an owner. In addition to his extensive experience as a corporate financial advisor, Mark has experience as a C-suite executive in ag processing. He has also served on numerous boards within the ag supply chain and biofuels industries. During his eighteen-year tenure at Piper Jaffray, Mark managed the offering of over $10 billion in investment grade rated bond offerings, structured debt financings and securitizations, and led in excess of $500 million in private equity offerings for food, agribusiness and biofuels companies including placement of LP units for an Iowa-based private equity fund. Mark has appeared in numerous national conferences on agribusiness and biofuels and has had articles published several times in national periodicals. Mark received both a Bachelor’s Degree in Finance and a Bachelor’s Degree in Economics, cum laude from the University of St. Thomas.

John Campbell is a Managing Director of Ocean Park and pioneer in the renewable fuels industry. He was previously responsible for building and operating the first commercial scale biodiesel plant in North America as a Senior Vice President with Ag Processing (AGP) – a $5 billion soybean processing cooperative. John had development and P&L responsibilities for ethanol, biodiesel, and bio-based industrial products at 4 plant sites totaling nearly 200 million gallons. Under Campbell’s leadership, AGP commercialized the first purpose-built biodiesel plant in North America and was the leading U.S. biodiesel producer during his 21 year tenure. In addition, John served as Deputy Undersecretary of Agriculture for President George H.W. Bush and was responsible for formation of the President’s 1990 Farm Bill proposal. He also served as a key staff member of the House Agricultural Appropriations Subcommittee and the Senate Agriculture Committee, and was instrumental in creating and maintaining federal biofuels tax incentives, USDA biofuels and EPA Renewable Fuel Standard laws and regulations. John received his Bachelor’s Degree in Animal Science from the University of Nebraska and his post graduate Diploma from the University of Sydney, Australia in Agricultural Economics.

Prior to joining Ocean Park, Eric worked at Goldman Sachs as a Senior Vice President in the Investment Banking Division based in Los Angeles and New York, where he focused on financial sponsors, leveraged finance, financial institutions, and financial technology. While at Goldman, he regularly executed multi-billion dollar M&A engagements as well as debt and equity capital raises for corporations as well as private equity, venture capital, and hedge funds. Eric started his career at Deutsche Bank Securities in the industrials group with a focus on business and environmental services.

Chris Artzer is a Managing Director of Ocean Park. With over two decades of business and legal experience, Chris has amassed unique leadership experience in the energy, petrochemical and biofuels industries as a financial advisor, business executive, turnaround specialist and corporate counsel. Prior to joining Ocean Park, he spent nearly 15 years in C-suite legal and business roles – as the President, CFO and General Counsel of Inaeris Technologies (f/k/a KiOR) and the Vice President and General Counsel of TPC Group (f/k/a Texas Petrochemicals) and – where he achieved success in driving 180-degree turnarounds and growth within extremely challenging environments while achieving buy-in from executives, Boards of Directors, and stakeholders. In addition, as an financial restructuring attorney at the boutique law firm of Sheinfeld, Maley & Kay and the international law firm of Akin Gump Strauss Hauer and Feld, Chris focused on representing debtors, unsecured creditors’ committees and secured creditors in both complex Chapter 11 cases and out-of-court workouts in a wide array of industries throughout the United States. Chris received a Bachelor’s degree from Dartmouth College and his Juris Doctor degree from the University of Texas School of Law.

Zachary Putlak is an Associate at Ocean Park and is based in Los Angeles. Mr. Putlak has experience across a broad range of financial advisory roles, including business and intangible asset valuations, financial and strategic analysis, forecasting and transaction support.

Prior to joining Ocean Park as an Analyst, Mr. Putlak was a Consultant at FTI Consulting, where he focused on the valuation of media and entertainment assets, including film, television, and media and entertainment companies. Prior to that, Mr. Putlak was an intern at Ocean Park, where he assisted with advisory projects across a number of renewable energy, agribusiness, agricultural technology, and food and beverage sectors.

Mr. Putlak received his Bachelor’s Degree in Business Economics with a minor in Spanish from the University of California, Los Angeles.

Andrew Czech is a Vice President at Ocean Park and has two decades of experience in finance, corporate development and operations. His diverse industry experience includes biofuels, waste-to-energy, financial services, software and professional services. He has directed companies through merger and acquisition transactions, private placements, senior debt originations, financial restructurings, project site developments, post-merger transitions and strategic planning. Mr. Czech received a BBA in Finance and Economics from the University of North Dakota and an MBA with a Finance concentration from the University of St. Thomas.

John Panvica is an Analyst at Ocean Park and is based in Minneapolis, MN. Prior to joining Ocean Park, John obtained his CPA License and began his career at PricewaterhouseCoopers as an Audit Associate within PwC Private. At PwC John was exposed to a wide range of private companies across various sectors. He is also enrolled in the CFA program and has passed Level 1 in the Top 10%. John received his Bachelor’s and Master’s Degrees in Accounting, Summa Cum Laude, from the Opus College of Business at the University of St. Thomas. He also played on the NCAA hockey team and was the Captain his Senior year.

Frank Kim is a Director at Ocean Park and has over 16 years of investment banking and corporate development experience across the renewable energy, food, agribusiness, technology, and institutional capital industries. During his career at Ocean Park and previously with Credit Suisse and Deutsche Bank, Mr. Kim has executed over $2 billion in M&A transactions and in excess of $500 million in capital raises. Mr. Kim also has experience advising clients on multi-billion dollar engagements and multi-million dollar restructuring assignments. Previously, Mr. Kim was a Senior Manager at Silver Spring Networks, a smart energy grid platform provider, where he drove growth in sales operations worldwide. Mr. Kim received his Bachelor’s Degree in Economics from the University of California, Los Angeles and holds his Series 62, 63, and 79 licenses.

Natasha Trilli is a Senior Analyst at Ocean Park and is based in Houston.

Natasha has experience in the energy industry where she held several roles including drilling engineer, reservoir engineer, and business development manager. She has worked on US and international oil and gas projects at Baker Hughes, Wolfgang Petroleum, and Equinor. Natasha obtained her Bachelors of Science in Petroleum Engineering from Texas A&M University and her Masters of Business Administration focused on finance and energy from the University of Houston.

Monica Vidal is a Senior Advisor and Registered Representative of Ocean Park Securities. Monica is a Managing Director of Lattice Capital Partners. Based in San Francisco, Monica has over 25 years of professional investment experience.

Monica was until recently in charge of business development for the US and the Americas at one of the leading Spanish Investment Bank. Previously she worked at J.P. Morgan where she was head of Alternative Investments for Latin America.